When he took office, I bet he wouldn’t last a year. I wasn’t thinking of impeachment, really, I thought he simply wouldn’t have the staying power to see it through.

Political dramas are some of my favourite TV series. The West Wing was probably my initiation into American politics. I had never before seen a show about the actual day to day administration in the White House. It was mesmerising. Also, considering that Bartlet was supposed to be a Democrat, and we were meant to see the best possible administration, it was soon evident what kind of clusterfuck American politics are. (Seriously, you guys, riders? That shit needs to go. Who does that?)

I’m currently watching season 3 of „Madam Secretary“, a show focused on the Secretary of State, or, as the rest of the world calls it, the Foreign Minister of the United States. The person in question is a former CIA operative, and as questionable as the institution is (ask anyone in Latin America or the Middle East), the job has prepared her well for the tribulations of this office. See, foreign policy is a difficult and delicate subject. You need to know the lay of the strange land you’re dealing with. You need tact. You have to know who the players are, who they’re connected with, what their agendas are. I’m sure the show simplifies stuff a great deal, but nowhere near as much as your current President does.

Let’s talk about President Dalton, „Madam Secretary“’s Commander in Chief. Himself a former CIA person, he has a good grasp on international politics. He is also seen to rely a great deal on the intelligence his agencies bring to him, as well as the counsel of his advisers. Nowhere is he heard saying that he’s „a very smart guy“ or „a stable genius“. He knows that he cannot know everything, so he turns to the people who do. As any sane person would, really. President Dalton is calm, aware, conscientious, and cautious. While one might disagree with some of his policies (the show takes great pains to avoid a clear statement on whether he’s a Republican or a Democrat, but there are tiny indicators that he might be a Republican), the process of how he comes to a decision is always careful and measured.

Back to 45. Not only does he not know shit, he thinks he does, know, in fact, everything. He’s on record for saying that he doesn’t need his agencies‘ intel because he’s so smart, he can figure everything out himself. It’s one of his hobbies to try to goad other batshit crazy despots into nuclear war via Twitter. He brags about the size of his button. How can you… even? But you know that. On top of everything, your government is now shut down. It is time for you, dear sane people of the United States, to do something about all of this.

The Midterms are coming up. 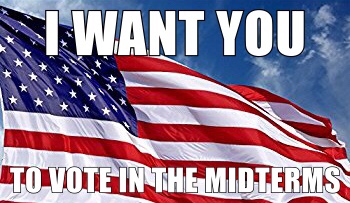 You’re lucky. Your inefficient and convoluted political system can end your present nightmare far sooner than people in other countries could hope for. While I strongly question the wisdom of electing your Congress every two years, this circumstance works in your favour right now. Oh, why do I question the process? Because nothing ever gets done in two years, not even in the US. Your country seems to have the attention span of a toddler. Two years is nothing. Your elected officials are constantly campaigning for re-election as soon as they take their seats. How do you expect any work to get done? But I digress; the Midterms are coming up, and you need to get out and vote.

Edit: It has been pointed out to me that only (only!) 87% of all seats in Congress are up for election at any given Midterms. Here’s hoping you can still work with this drastically diminished (ahem) number.

The electorate does not take enough of an interest in the Midterms. Voter turnout is consistently lower for the Midterms than in Presidential elections. This probably has to do with the perception of importance, and that’s where I have to tell you, you’ve got it wrong. As 45 proves on a daily basis, the President is not the one making the laws. He may sign laws into effect, and he has this weird power of Executive Order, but the legislative body of your – or, indeed, any democratic – country is the parliament, which you call Congress. These people determine what your life will look like in the foreseeable future. For, you  know, all of two years. Congress can also prevent the President from doing stuff. Remember how the Republicans practically rendered Obama’s Presidency useless during his last two years in office? Well, I’m sad to say, you’re gonna have to make sure to elect a Congress who can do the same to 45. It is in your hands. This is not a drill.

Help other people get registered to vote.

I notice how on the map in the link above, the South seems to have less voter participation than the North. While I was initially relieved, I suddenly realised that that was probably due to voter suppression in the South. White people: make sure your neighbours of colour get to vote. Some States have incredibly convoluted systems that make registering hella complicated for people who don’t speak legalese. HELP THEM. Make sure that everybody’s voice is heard. Also, remember Alabama: if it weren’t for black people and other people of colour, the new Senator would have been that pedophile. Your fellow white people betray you, every time it counts. Help voters of colour, and help the poor. They’ve been looking out for you, even when you haven’t been looking out for them.

Go out and campaign for your favourites.

Take to the streets. Pick your candidate and go door to door. Or be a candidate, and still go door to door. You wanted Bernie, and you still hate Hillary? Here’s your chance: raise up your local Bernie, or better yet, BE your local Bernie. Do the work. Your country has this mythology of pulling yourself out of the swamp by your own bootstraps. The swamp has gotten bigger, and here are your bootstraps. It’s gonna be all blood, sweat, and tears, but such is the price we pay for apathy and „protest votes“.

It’s up to you. Every single one of you who can vote. This is how democracy works. There was a vision whereupon this nation of yours was founded. Allow me to remind you of Emma Lazarus‘ poem, as inscribed on the bronze plate at the feet of the Statue of Liberty:

Not like the brazen giant of Greek fame,
With conquering limbs astride from land to land;
Here at our sea-washed, sunset gates shall stand
A mighty woman with a torch, whose flame
Is the imprisoned lightning, and her name
MOTHER OF EXILES. From her beacon-hand
Glows world-wide welcome; her mild eyes command
The air-bridged harbor that twin cities frame.

„Keep, ancient lands, your storied pomp!“ cries she
With silent lips. „Give me your tired, your poor,
Your huddled masses yearning to breathe free,
The wretched refuse of your teeming shore.
Send these, the homeless, tempest-tost to me,
I lift my lamp beside the golden door!“

Remember, and aspire to be worthy of this promise. I have faith in you.

This site uses Akismet to reduce spam. Learn how your comment data is processed.