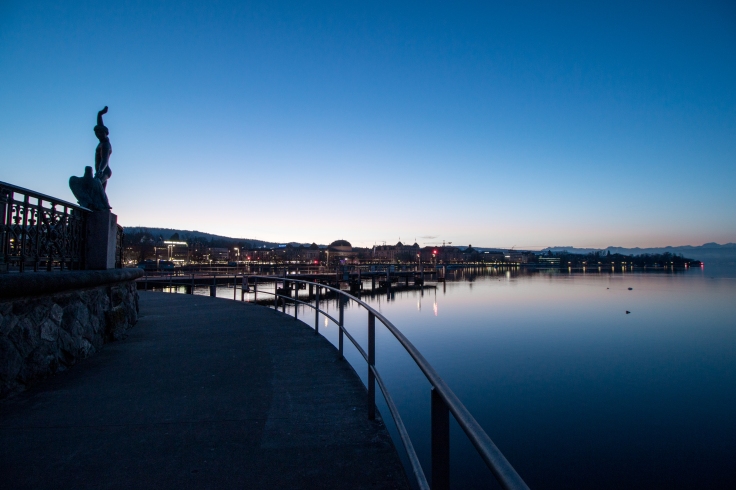 The skies might be leaden today, but don’t let the weather fool you, for the City by the Lake is impervious to it. Of course the monochrome dampens her beauty, but at the same time, it deepens it. You need to look a little closer now, come a little nearer; suddenly, you realise that this place is not what you thought at all. In the light, you see only through the hasty eyes of youth, touching on shimmering surfaces full of temptation. Now, that the gloaming obscures the City’s evident charms, your gaze may focus inward, and follow the mysteries.

He has tuned his motorbike to a low, grumbling thunder. It is black, as is his attire, down to the impenetrability of his visor. He is therefore heard before he is seen, an approaching menace, the onset of fury. He is heard, even, over the din of the City.

But the City is unforgiving, and she plays favourites; he is not one of them. She might have paved his way, but all the while she is raising obstacles in his path. Her roads are winding, her inclines steep.

He roars as best he can, and the City, unimpressed, turns away.

The City is a many-facetted jewel, glistening blue and steel in the sunlight. As any other place, she shines under blue skies and broods under grey, but here, the brooding is prolific. Every time she awakens from her slumber, she is innervated. She is old and new, her old stones giving live to new thoughts. Her hands, eyes, and heart are both the spark and the vessel for endless dreams, dreamt from near and far.

From far, they flock to the City, to her fecund concrete meadow and her quickening forest of glass and steel.

The City is our home. And you, you are welcome here.

She wakes as the sun goes down, ever later as the year progresses into its halcyon days. She puts out her wardrobe, five kinds of black; the light of dusk smudges the lines between them.

On the balcony, she watches the daystar set behind the hills. It is time. She walks out the door and into the night, her dominion. Thursday is the new Friday, which used to be the new Saturday: the party people are loud and about. Inwardly, she cannot help but smirk; there’s a reason the weekend is called „amateur nights“.

Away from the crowds‘ bright distractions she becomes one with dark, and she’s gone.

It is said that the wind off the sea carries the wails of drowned mariners, their souls trapped forever in their bodies‘ watery grave. But what voices does the air carry in the City? Her waves are calm and she is at peace; when life departs in serenity, what reason is there for the essence to linger?

Ah, but what city does not have ancient griefs, and skeletons in her closet? Listen closely, and you will hear the dirges of the long-dead, fallen in bloody wars on this soil, hundreds of years past. But no, go deeper: do you hear them? This is the faint chorus of those who went quietly into the night, on a field of lost hope and bloody needles.

Out there are hunters, tiny predators. They sow terror into the heart of many. The word is out, silent death is approaching, and those who can take wing. The others… They are on their own. Their fear is a delicious aroma in the twilight. Eyes of citrine, jade, and seldom auqamarine follow the flitting panic in the vegetation. The stalkers, they are shadows of grey and black in the fading light. Their stripes and dots might have been meant to hide them in tall grass, but no matter: the City is their territory now, and they have adapted perfectly. Their movement is swift and controlled, the twitching of their tails alone betrays their own tension. Soon, now. There will be blood.

You think the City is your ally? You merely adopted the City. I was born in it, molded by it. I didn’t have a concept of what „countryside“ was until I was already a teen, and by then, it was nothing to me but emptiness.

You speak of your fields and forests and praise them as the only real life. You seek out the City for empty thrills. You do not feel her heartbeat, you do not know her hidden gardens, you are oblivious to the silvery strands that bind us all, to each other and to her.

We do not seek your comprehension, let alone your approval. They are meaningless. Come. Stay, for a night, or a few years. When you are gone, the City lives on. As will we.